While living in an urban area, as I do, one might get overwhelmed by the overpopulated and unstructured soundscapes of cities and industrial areas. The consequence for most people is to stop listening and focusing on the visual perception. Although  we don’t actively hear the most of the polluted soundscape, our brain has to evaluate the incoming data of our acoustical perception which might result in stress. For that reason it is of importance to make people aware of this phenomenon and let them participate in the design of their acoustical space.

As part of the workshop and exhibition days of the People Smart Sculpture project which is co-founded by the EU and implemented by the m2c Institute Bremen, I had the chance to make a workshop in which people should learn about soundscapes and their acoustical perception. Integrated in the workshop was a smartphone application, developed by Kari Salo and Aura Neuvonen from the Helsinki University, Finland, that offers the opportunity to simply create a soundscape and manipulate it. 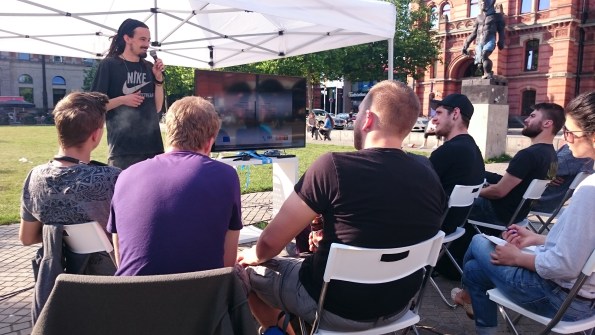 While beginning with the general philosophy of soundscapes which has been formalized by R. Murray Schafer, the participants have been asked to generate a soundscape on their smartphone according to a certain situation or feeling which then have been taken into discussion. Afterwards we went for a walk to the train station Bremen where the exhibition of the People Smart Sculpture project has been located and continued the discourse. With the reflection of what we heard while walking to the exhibition, I continued to explain how we perceive all these sounds and what our brain has to perform to evaluate them.

Understanding is the key to interpret our emotions caused by sensual impressions and in the end the participants felt positive about the workshop and said that they now have a little more vocabulary to describe what they hear.