Most of you might know the problem of buzzing sound or any kind of unwanted frequencies amplified and played back on your speaker system. Especially when you turn up the volume without playing any music. It often occurs that this noise is heard when the power supply  of the laptop is plugged in but not on battery. On bigger computer systems though where you are not able to plug out the supply the search for the cause of the problem is more complicated.

When I firstly experiences a noisy buzzing sound in my system it initially was very quiet. I realized that the noise became louder when the computer needed more processing power, especially while playing computer games. Since I did not know the component that was causing the problem and had no spare parts I asked the internet for a solution. I read that the cause could be a defective transistor either on the graphics card, the power supply or even the main board. During the search for a bigger solution I read about DI boxes with groundlift.

In this way I have been able to reduce the problem of my system. The following graphic shows the frequencies that was heard over the speakers. I recorded them with my home setup in living room atmosphere though I normalized the recording afterwards to take a closer look to the frequencies. 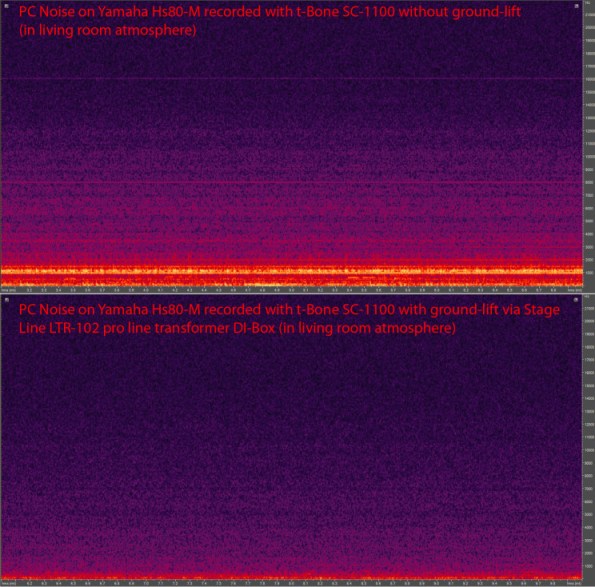 As the story continues, it took a while, I heard quite the same noise I heard over the speakers coming out of my computer. After checking the coolers and having the effect amplified on higher processing load I concluded that the power supply was the cause. Little time later my computer crashed and the power supply was done. With the new power supply a “Paris 650w from Thermaltake” the problem vanished completely even with no ground lift. In the end I think that a transistor just slowly gave up on his life screaming.